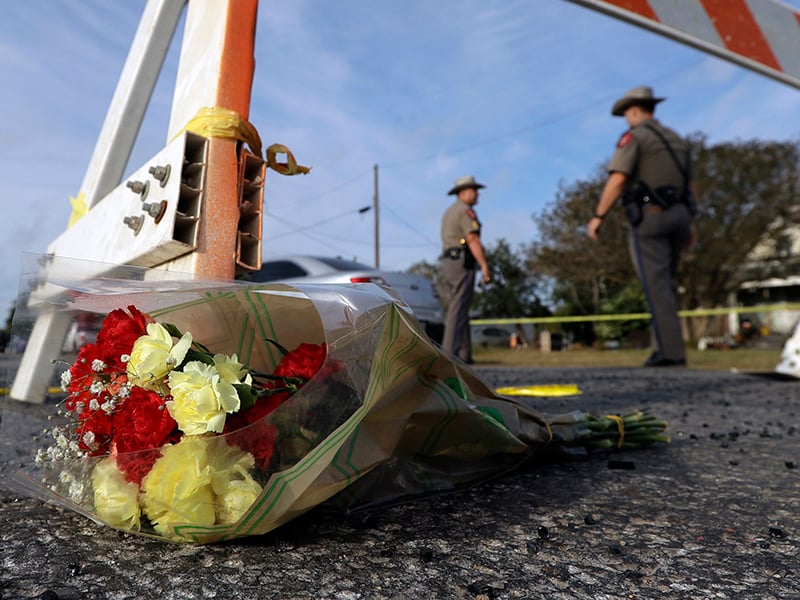 A bouquet of flowers lies at the base of a roadblock where law enforcement officials work at the scene of a shooting at the First Baptist Church of Sutherland Springs, Monday, Nov. 6, 2017, in Sutherland Springs, Texas. A man opened fire inside the church in the small South Texas community on Sunday, killing and wounding many. (AP Photo/Eric Gay) November 6, 2017 By Adelle M. Banks ShareTweetShare

(RNS) — A small Southern Baptist church in Sutherland Springs, Texas, has turned into a crime scene, with at least 26 people dead and about 20 injured. As the nation reels from another mass shooting, religious leaders were quick to react to the latest tragedy.

Cardinal Daniel N. DiNardo, president of the U.S. Conference of Catholic Bishops, and leader of the Archdiocese of Galveston-Houston in Texas

“This incomprehensibly tragic event joins an ever-growing list of mass shootings, some of which were also at Churches while people were worshipping and at prayer. We must come to the firm determination that there is a fundamental problem in our society. A Culture of Life cannot tolerate, and must prevent, senseless gun violence in all its forms. May the Lord, who Himself is Peace, send us His Spirit of charity and nonviolence to nurture His peace among us all.”

Now will the church start talking about gun violence? Now?

“We are praying for the families of those who were killed as well as those who were wounded. We pray that God will lay His merciful hand of healing on all who have suffered and have been injured. May God bring healing and hope to the church and the city. May God bless all the police officers serving in that area. And may God prevent further incidents like this throughout our nation in the days to come. Our hearts and prayers are with you.”

“Today’s horrific church shooting is every pastor’s worst nightmare and is proof of the reality of evil. Although the Bible never diminishes the pain of evil, it does promise that one day when Christ returns, evil will be defeated forever. Until that time, we pray that the members of First Baptist Church, Sutherland Springs, will experience the promise of Psalm 34:18: ‘The Lord is close to the broken-hearted.’”

Pray for the families of those killed and for the people wounded in the horrific church shooting in Sutherland Springs, TX, today.

“God is setting before America a choice between life and death — we must choose the way of life that means a breaking of the death grip the National Rifle Association (NRA) has on our politics. The way of life is to grieve for those who have died and commit ourselves to a more peaceful future without this plague of gun violence.”

“The leadership of the Union of Orthodox Jewish Congregations is outraged by the heinous attack that occurred last night at the First Baptist Church in Sutherland Springs, Texas, killing 26 people and wounding many more during a prayer service. This act of senseless violence and brutal terror has no place anywhere in the world, but particularly not in a house of worship. Indeed, the perpetrator has violated all houses of worship with this vile attack.”

The Rev. Robert Schenck, president of the Dietrich Bonhoeffer Institute in Washington, D.C., and subject of “The Armor of Light” documentary

“As a nation, we must call on our most experienced, knowledgeable, and strategic professionals to weigh in with their wisdom in how to deny murderous people the means for committing atrocities like this. The killer in this instance could have done far more damage much more easily by throwing a hand grenade into the sanctuary, but he didn’t because he can’t get a hand grenade. The question we must answer is why and how people bent on death and destruction can carry out their dastardly deeds so easily? Just as we frustrate our enemies on the battle field by interrupting their supply chains, let’s do the same with psychopathic killers.”

Sarwat Husain, president of the San Antonio chapter of the Council on American-Islamic Relations

“During times of tragedy and heartache, all Texans must, and will work together to help alleviate suffering and to offer material and spiritual support for one another. We pray for the loved ones of those killed in this senseless attack and for the speedy recovery of the wounded.”

“The devastating and, sadly, preventable deaths of congregants at First Baptist Church of Sutherland is a yet another violation of sacred worship places and sanctuaries — our temples. This constant barrage of homegrown terrorism is allowed by the convenient misinterpretation of the 2nd amendment by the NRA and anyone else who takes their money. Yet, we are ALL complicit and have blood on our hands because we have the answers to avoid senseless killings happening to us, Americans. How long must we send our sincere condolences, thoughts and prayers? How long before we manifest our sincerity with a change in policies and leadership?”

It’s tragic that we’ve normalized violence & mass shooting in our country. This is not normal. This is not okay. Be sad but also be angry.

“American Baptists categorically reject all forms of unnecessary and senseless violence, regardless of motivation. Throughout the country, I know our churches will mourn and pray for the church and the town they serve in solidarity with all who have experienced grievous loss. I ask for every church to dedicate a special time of prayer for First Baptist Church and Sutherland Springs when you gather for Bible study, service or worship this week.”

The Rev. Jennifer Butler, CEO of Faith in Public Life

“The killing of 26 people in a place of worship is a senseless act of evil. My heart is in anguish for the victims and loved ones whose lives have been scarred. As a pastor, I believe our nation’s response to this tragedy must not stop with prayer. Congress must pass common-sense gun policies that prevent tragedies such as the massacres in Las Vegas, Charleston, Orlando and Sutherland Springs. Our lawmakers have a moral responsibility to keep weapons of war out of killers’ hands in the first place. Our lives are at stake.”