Researchers have developed a huggable, cushion-like device that mechanically simulates breathing, and preliminary evidence suggests it could help reduce students’ pre-test anxiety. Alice Haynes of the University of Bristol, U.K., and colleagues present the device and findings in the open-access journal PLOS ONE on March 9, 2022.

Within this category, a small but growing body of research highlights the anxiety-reducing potential of touch-based devices, such as TouchPoints wearables and Paro the seal, an interactive therapeutic robot.

Now, Haynes and colleagues have developed a new, touch-based device that could ease anxiety. They initially built several prototype devices that simulated different sensations, such as breathing, purring, and a heartbeat. Each prototype took the form of a soft, huggable cushion that was meant to be intuitive and inviting.

Focus group testing identified the “breathing” cushion as being the most pleasant and calming, so the researchers further developed it into a larger, mechanical cushion.

To test the new device, the research team recruited 129 volunteers for an experiment involving a group mathematics test. Using pre- and post-test questionnaires, the researchers found that students who used the device were less anxious pre-test than those who did not. The experiment also compared the breathing cushion to a guided meditation, and found that both were equally effective at easing anxiety. 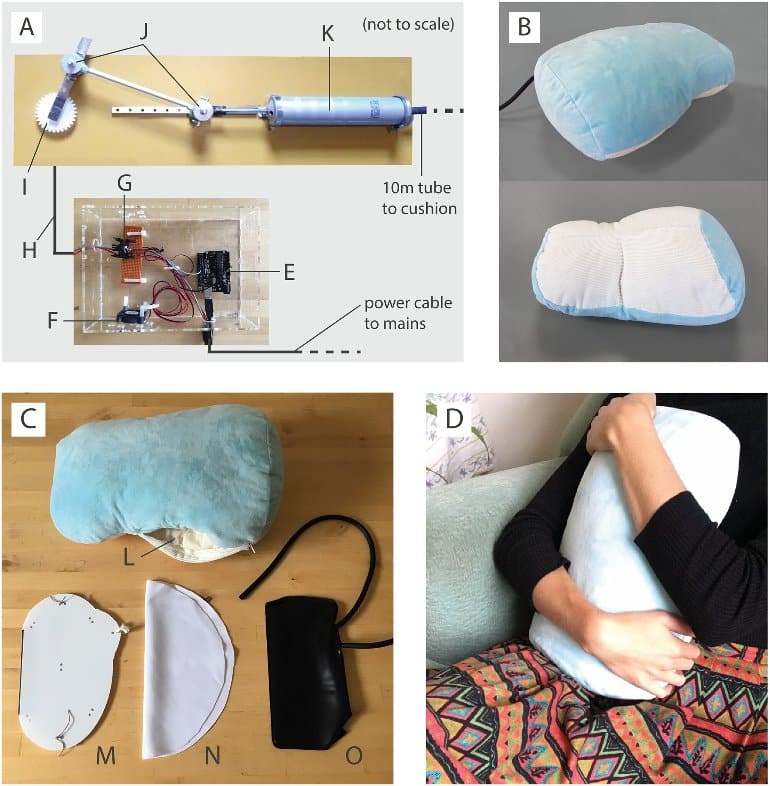 These findings suggest that the breathing cushion could be used to reduce anxiety, for example for students who are anticipating exams. The researchers now hope to further refine the cushion for testing in people’s homes.

They also plan to investigate people’s physiological response to the device—for instance, changes in heart rate or breathing patterns—in order to elucidate the particular mechanisms by which the device might ease anxiety.

The authors add: “We were excited to find that holding the breathing cushion, without any guidance, produced a similar effect on anxiety in students as a meditation practice. This ability of the device to be used intuitively opens it up to providing wider audiences with accessible anxiety relief.”