Happy new year, tarot lovers! If you’re new year’s resolutions involve something along the lines of ‘do more tarot’, I’ve dug out a few posts which might help. Here are some neat, simple ways to make tarot a part of your daily routine this year. Where to start if you’re a tarot newbie has some tips for getting started with tarot. Did you get a new deck for Christmas? Get to know it with this tarot deck interview spread. And this creativity and courage tarot spread can help you manifest your new year’s goals. Have fun!

In my little queer tarot bubble, the most hotly-anticipated tarot deck of 2016 was the Slow Holler Tarot. A collaboration between over 30 artists and writers with queer and/or Southern ties/identities, Slow Holler crowdfunded back in April 2015 and took a painstaking 19 months to come into being. 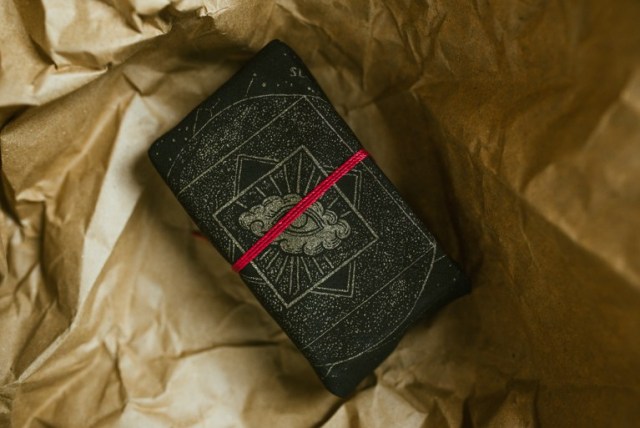 It’s finally here! Those of us who pre-ordered during or after the project’s phenomenally successful Kickstarter should already have their decks (and if you didn’t, you can pick one up direct from the makers). Mine arrived a few weeks ago and since then I’ve been slowly getting to know these beautiful cards. 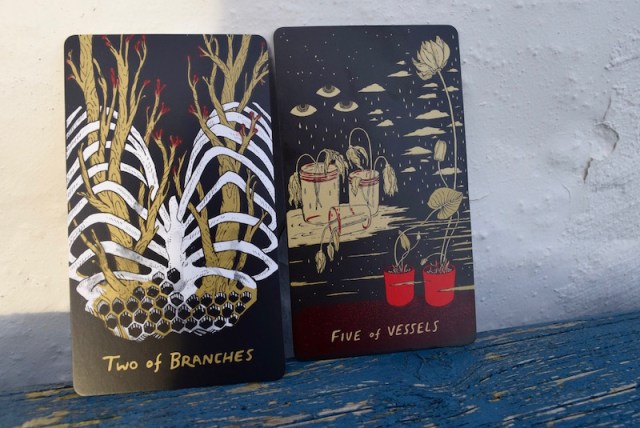 Like all tarot decks, Slow Holler reinvents the tropes and traditions of tarot, offering its own take on the archetypes and experiences that make up tarot’s structure. In this case, that means through the lens created by those queer and Southern ties. What does it mean for a deck to explore ‘Southern identities’? As a white, middle-class lass from the UK, it’s hard for me to know (hence this not being a review as such, but more a sharing of impressions.) When I spoke to the project’s founder E Henderson back at the beginning, they talked of storytelling, marginalisation, and a rootedness in place that may feel alien to those from elsewhere:

Across the US and in popular culture, the South and its people are often portrayed as cruel, stupid, backwards, one-dimensional. But really, Southerners have varied and complex identities. We tell stories to stay awake. We tell stories to communicate. It is how we come to know each other. It is a part of our culture. We may be black, brown, white, queer, undocumented. We come from swamps, foothills, and sandy pines. We have different histories and experiences, but we came from this place and we shape this place. 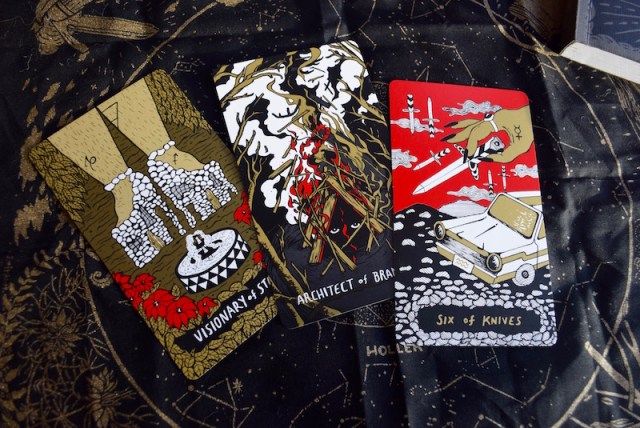 That ‘storyteller’ vibe is deeply present in the finished deck — I think for me it’s the quality that stands out the most, and that draws me in the most. From the way it comes tied in a printed handkerchief, to the common threads of red, black and gold that run through each card, there’s a timelessness here that evokes oral traditions, fables retold around campfires, the handing down of wisdom through generations. Some cards depict everyday scenes, people going about their lives, struggling, dreaming, doing. These cards give us stories we might relate to easily. Others are heavily symbolic, conveying their messages through animals, plants and objects (the plants, in particular, I adore.) Still others, like the greatest stories of all, are obscure and mysterious, leaving you wondering ‘what actually happened, in the end?’ 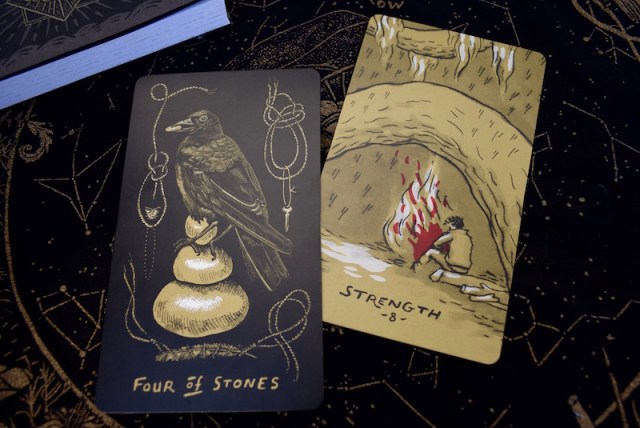 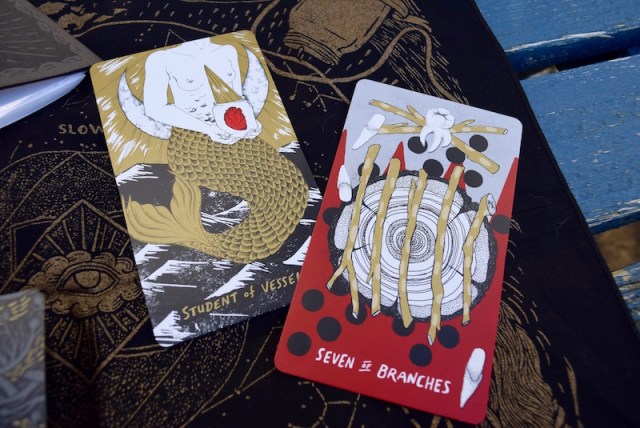 One element of Slow Holler that makes it feel outstandingly queer is the space it creates for diverse gender identities. Not a single opportunity has been passed over to question the traditional/mainstream gendering of tarot cards, and card by card and as a complete work, the deck reclaims the whole of tarot from those tired and unnecessary binaries. In their heartfelt review of the deck, Elisabeth Waller found this inclusive and welcoming:

I do see my gender queerness represented a lot. I also see lots of other folks which is so refreshing and feels so real. I see representation to so much more than that—trauma that can come from being othered, boundary issues and what is needed to heal, the need for community, and visibility of the fact that so many in the LGBT+ community have had to find and create our own families. 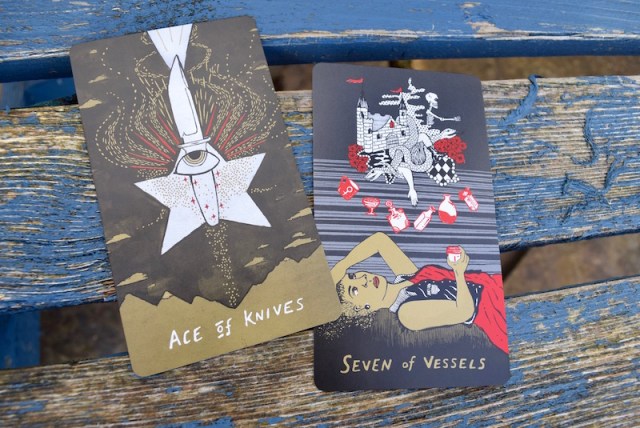 Some of the most heavily-gendered cards in a traditional tarot deck include the Emperor (usually portrayed as an authoritative, decidedly male figure), the High Priestess (a representation of the ‘passive feminine’…whatever that means) and the Empress (a nurturing, earth-mama type who is often pregnant and invariably characterised as female). Here, along with countless other cards, they have been lifted from these reductive constraints, freed from binary pronouns, renamed and reimagined. Yet rather than completely reinventing each card, it feels more like the creators have dug their way back to the card’s root, to that archetypal essence that existed before anyone felt the need to impose ‘hes’ and ‘shes’. The result is a a clarity and openness of meaning — it suddenly feels so much easier to get to the root of the card’s energy. This is supported beautifully by the small yet detailed guidebook, which helps make this deck one that anyone can pick up and use, regardless of their experience with tarot. 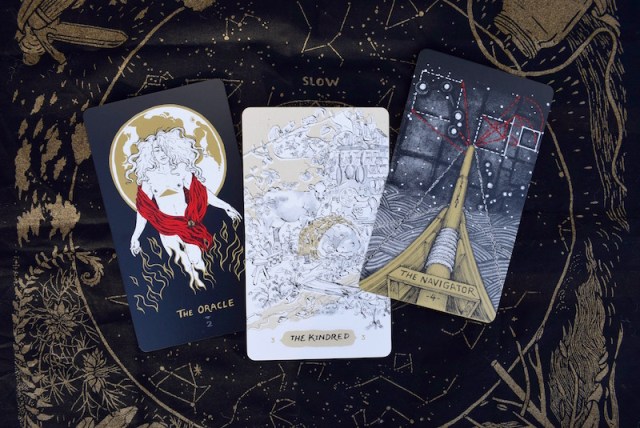 The High Priestess is now the Oracle, the Empress is the Kindred, and the Emperor is reimagined as the Navigator (one of my favourites in the deck). 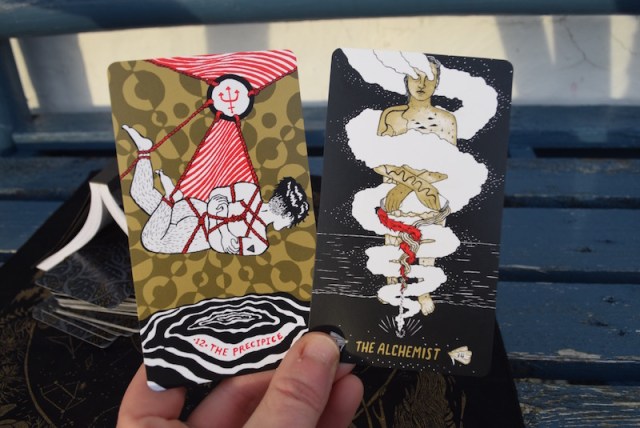 The Precipice appears in place of the Hanged Man, and the Alchemist takes the place of Temperance.

Minor cards too, the four suits and the court cards, have been renamed in a way that really resonates for me. Cups are now vessels, wands are branches (beautiful!), pentacles are stones, and swords are, brilliantly, knives. Rather than the standard hierarchy of Page, Knight, Queen, King, here the four ‘people’ of each suit are Student, Traveller, Visionary and Architect. As a self-taught tarot reader who has, like many others, struggled with the traditional court, the renaming of these cards again makes space for their essence and true energy to come through. Typically, I find tarot learners struggle with knowing the difference between a King and a Queen in a tarot reading, but here, the terms ‘Architect’ and the ‘Visionary’ really convey the underlying idea of each card. 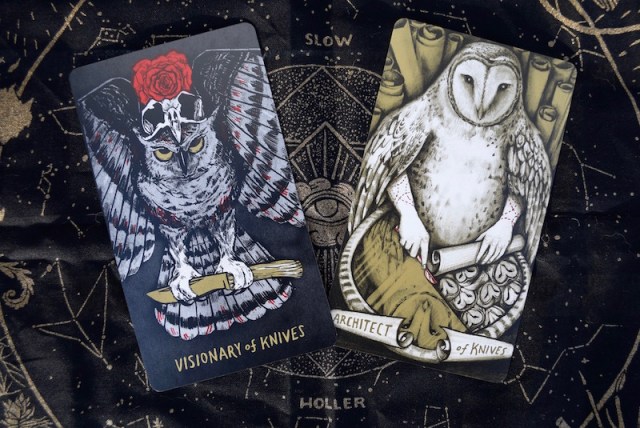 Tarot blogger Asali (who identifies as an immigrant southern queer black femme) had her own take on representations of both ‘queer’ and ‘Southern’ in her recent review, describing the agonising wait for a deck that promised so much, and her searching through the cards for depictions of her own self (I recommend you read the whole thing):

Whose queer is this? Whose South is this? It doesn’t feel like enough to me. And I am asking for a lot. I won’t stop asking for more boldly and compassionately rendered southern, black, brown, and indigenous queer bodies living out both our material realities caught up in and imagined fantasies free of webs of power. Even as I acknowledge that we are more than our bodies- we are these stories told, passed down throughout our lineages black and/or brown and/or indigenous and/or queer. I am asking for a lot.

For some, judging by the emails I’m receiving, Slow Holler will be ‘the perfect deck’. For others, of course, it will fall short – especially in terms of diversity. Even a project created by different people from varied yet linked backgrounds can’t hope to represent every experience, every facet of queer and/or Southern culture. 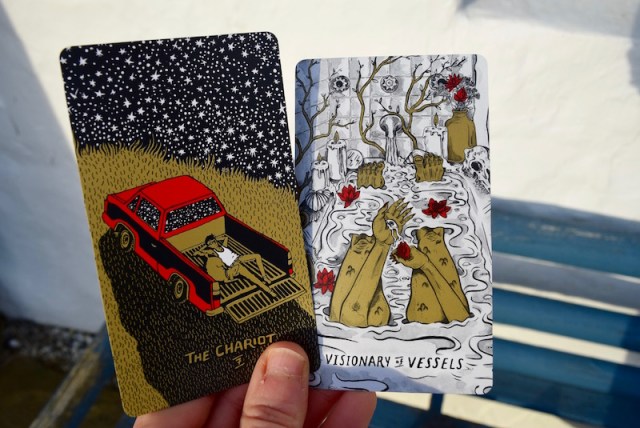 The cards themselves are slightly thinner than I had hoped, but not flimsy, and they shuffle beautifully. The print quality is outstanding, the matt laminate feels light yet sturdy, and the golds and reds really seem to glow from within. I adore the design on the back of the cards, of dark, interweaving branches repeated over and over — for those of you who read reversals, this design has a ‘right-way-up’, but still makes sense upside down.

The deck comes with a lovely hand-printed black and gold kerchief, and a small yet detailed guidebook aid interpretation and use. The book itself warrants its own review — its interpretations of the cards are some of the best I’ve ever read, encouraging, comprehensive, an example of what tarot really can be when it is given space. 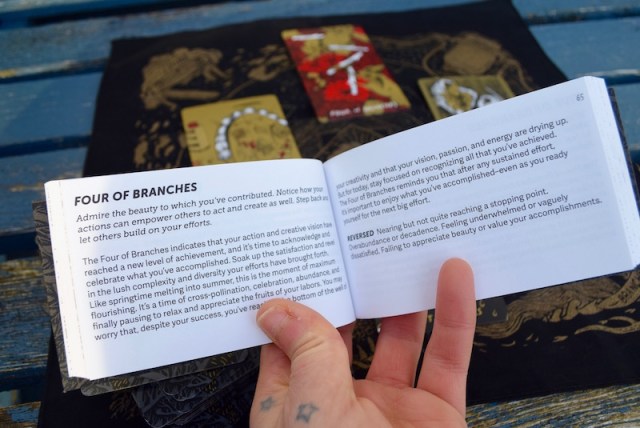 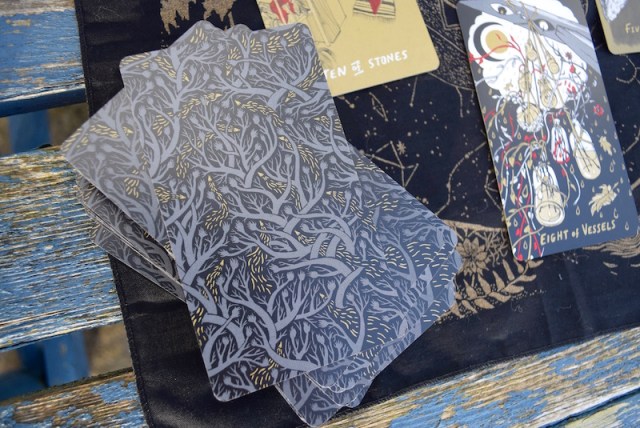 The design on the back of each card.

This is not a cheap deck by any means. At $46 is will be out of the reach of some of the folks who need it the most. This is a heavy and difficult topic for tarot deck creators who want to reach marginalised communities with their work, but also don’t want to compromise on ethics and quality, a conversation I’ve been having with E over recent months. Slow Holler has been printed locally in small quantities (cheaper tarot decks are usually mass-produced in China) and there have been many artists to compensate for their work; small batch projects like this one take a heck of a lot of resources to get off the ground, and the price has come out where it has. I have a lot of feelings about expensive tarot decks and the gentrification of spiritual practices and tools as a whole, but this is not a profiteering kind of a deck. 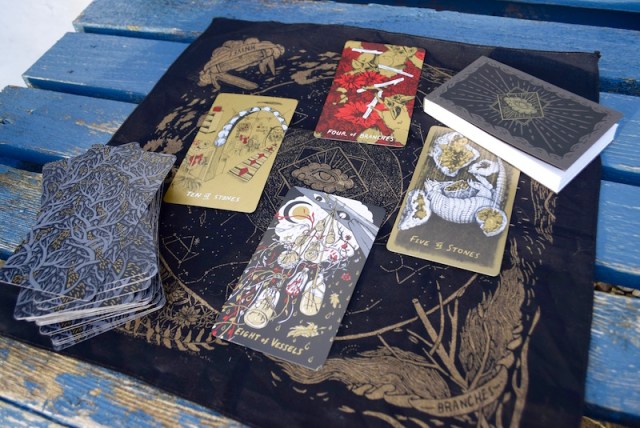 What really amazes me about this deck is how wide-ranging the artwork is, and at the same time, how intimately connected all of the cards feel. I’m not sure yet if this is simply the effect of the sparse yet sumptuous colour scheme, or it’s more the result of those common threads of identity, but as someone who struggles with collaborative decks (even the much-beloved Collective Tarot I find a challenge — the divergence in styles makes if very difficult for me to read and I tend to use it mainly for single-card draws and meditations) Slow Holler feels cohesive, whole, both a collection of 78 stories and a unified collection of stories that in turn, tells its own. 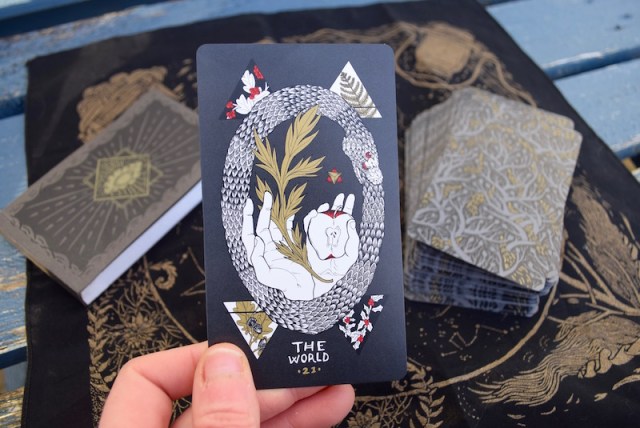