Summary: Microglia dysfunction in those who experienced early life adversity prompts an aberrant stress response during adulthood that may be linked to mental illness.

The poor function of microglia, the brain’s immune cells in individuals exposed to early life adversity (ELA) promotes aberrant responses to stress in adulthood that may be linked to mental illness, according to a new study led by researchers at the University of California, Irvine.

During brain development, microglia prune unnecessary synapses resulting in the formation of refined, functional circuits. Disruption of that process leaves too many synapses, changing the behavioral and hormonal responses to further stresses later in life.

“Much of neuroscience and study of brain diseases has focused on the brain’s neurons. This study highlights that in addition to neurons, other brain cells, and especially immune cells, play crucial roles in brain health and disease,” said Tallie Z. Baram, distinguished professor in the Departments of Anatomy & Neurobiology, Pediatrics, Neurology, and Physiology & Biophysics at the UCI School of Medicine.

“Neuroimmune interactions are a novel, important avenue to understanding and treating several brain disorders and mental illness and have been linked by other UCI researchers to Alzheimer’s disease.”

Brain development is governed by both genetics and early life experiences. Several mental illnesses, characterized by aberrant reactions to stress, often arise after ELA but its effect on stress-related brain circuit maturation was unclear.

In the study, led by UCI Postdoctoral Fellow Jessica Bolton, who is now an Assistant Professor at Georgia State University, transgenic mice of both sexes were housed in temperature-controlled, quiet, uncrowded conditions on a schedule of 12 hours of light and 12 hours of dark, with free access to food and water.

The control dams were place in cages with standard amounts of corn husk bedding and nesting material. The ELA dams received only one-half nestlet and reduced bedding materials. 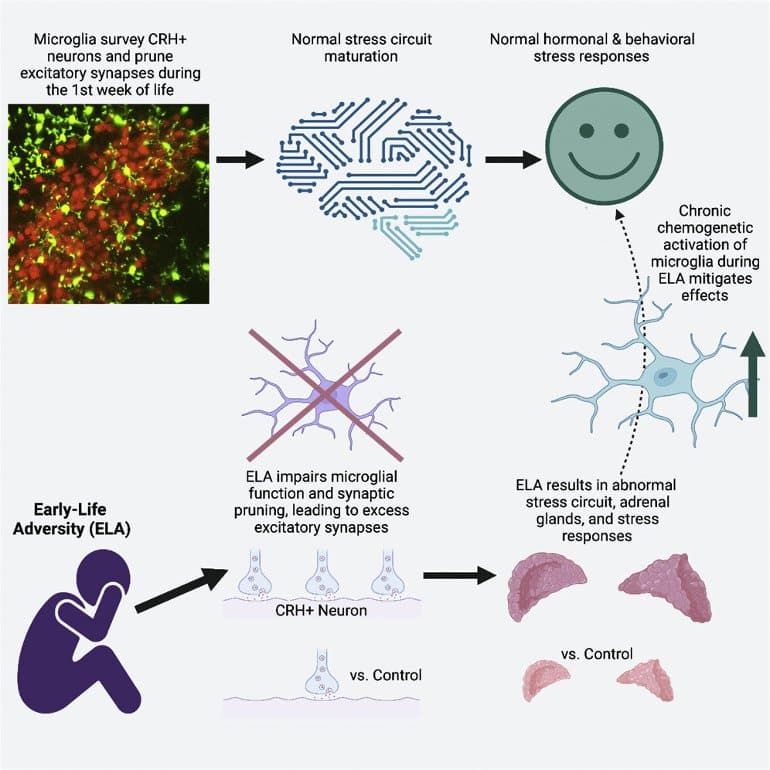 “Our discoveries reveal that ELA leads to reduced microglial process dynamics during a sensitive period. We know this is a direct effect of ELA, because we artificially activated microglia in stressed neonatal mice, which prevented the synapse excess and the abnormal responses to stress during adulthood,” Baram said.

“The next steps are to identify if the molecules that lead to microglial dysfunction can be used to prevent their malfunction and the resulting vulnerability to stress. This may be translatable to people.”